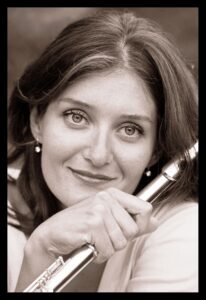 Milena Lipovšek has been a solo flutist in the RTV Slovenia Symphony Orchestra since 1999. In 1998 she graduated with honours from the Ljubljana Academy of Music, where in 2004 she completed her postgraduate specialist studies by performing Francaix’s Concerto for Flute and Orchestra. In 2017, she received her PhD from the Faculty of Theology in Ljubljana and obtained the title of Doctor of Family and Marital Therapy. In 2010 she completed her education in propaedeutics at the Slovenian Institute of Psychotherapy and in 2015 she completed her studies in integrative psychotherapy in Bilbao and obtained the title of integrative psychotherapist.
As an orchestral musician, she has collaborated with orchestras such as the SNG Opera and Ballet Orchestra in Ljubljana, the Mahler Chamber Orchestra, the OSESP Sao Paulo National Philharmonic Orchestra, the Australian Chamber Orchestra and the Lyon National Opera Orchestra.
As a soloist, she has performed several times with various orchestras at home and abroad and recorded several solo and chamber works for the archives of Radio Slovenia. As a soloist and in chamber ensembles, she performed several works by domestic and foreign composers, and many of her recordings were also released on CDs. As a soloist or in a chamber group, she has performed at various festivals in Slovenia, Italy, Austria, Croatia, Belgium, England, Brazil, Montenegro, Bosnia and Herzegovina, Serbia, the USA and Australia.
She is a professor at the Conservatory of Music in Ljubljana and regularly leads master classes in Slovenia (Podsreda, Celje, Štanjel) and abroad (Brazil, Germany, Montenegro and Serbia). Her students continue their studies at renowned faculties in the classes of eminent flute professors and achieve great success in national and international competitions.
Parallel with her profession as a musician, she has also been working as a psychotherapist in her private practice for many years.