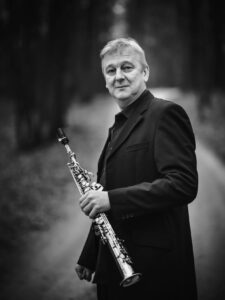 Gerald Preinfalk was born in Zulissen close to Freistadt in Upper Austria. The “music” started with the clarinet at early age and became a vocation with the studies of Jazz- and Classical Saxophone in Vienna. Discovering the local scene opened a wide range of activities, and gueststudies in Boston (USA) and Paris completed this constant curiosity.

Guest appearances have teamed him with the three big classical orchestras in Vienna (Wiener Philharmoniker, Wiener Symphoniker, Radio Symphonieorchester), and to Jazzbigbands like “Nouvelle Cuisine”, “Vienna Art Orchestra” and recently 2019 to Christian Muthspiel’s “Orjazztra”. In 2000 he became a member of Klangforum Vienna, one of the most renowned ensembles for contemporary classical music.

Special moments as a Soloist on the classical Saxophone:
2006 wrote Bernhard Lang for him a Soloconcert for Saxophones, Jazzband and Orchestra with the “Wiener Symphoniker”; 2013 Soloconcert from Edison Denisov for „Altosaxophone et Orchestra“with “Staatsorchester Stuttgart”; three performances of „Konsert für Altosax und Orchester“ from Lars Erik Larsson, 2016 with “Kölner Symphonieorchester”, 2018 with “Orchestra Recreation Graz”, 2019 with the “National Orchestra Teheran”.

In recent years the developement of own projects, composing, arranging and teaching became more of an importance:
Between 2007 and 2011 he wrote the music for the theatre pieces; „Peer Gynt“, „Hiob“ and „Du bleibst bei mir“ under the direction of Michael Sturminger (director of Jedermann in Salzburg) for the “Volkstheater Wien”.
In teamwork with the accordion player Klaus Paier they released the CD’s; „More than Tango“ (2000), „Saion (2004) and „Tangogo“ (2005). In collaboration with Christoph Cech and Per Mathisen he created the hommage to the Jazzclarinetlegend Jimmy Giuffre the CD „Giuffre Zone“(2006).
An important period of live and musical work happened between 2007-2014 with Alegre Corrêa the brasilian guitar virtuoso. After touring in different band settings over the years we produced only one CD, which we recorded on a life concert on his home island Florianopolis called „Gemeos“ (“twins”, due to the same date of birth..).

Since 2008 he holds the professorship for classical saxophone at “Kunstuniversität Graz”. Out of this work besides many visits for masterclasses in Strasbourg, Madrid, Wroclaw (PL), Szczecinek (PL), Tokushima (JP) und Tianjin (CHN) etc., he founded the Saxorchestra “KUG-SAX-SIPPIA”. The members are active students and alumnis. For this ensemble he brings arrangements and compositions. Some of the pieces are released on the german publisher label “Chili-notes”. Since 2014 a special duo formation called “Duonarchie” was found with the pianist Iren Seleljo.(CD “Art of Duo”) This ensemble plays mainly orignal music in the genre of contemporary classical music. Bernhard Lang and Simone Movio wrote pieces for them.

In 2017 he got the commission to compose the opening premier for the Jazzfest Saalfelden, the last big festival for Jazz in Austria. The live recording of this concert is released on the viennese Label “Jazzwerkstatt records”. The everlasting attraction to free Improvisation brought the Trio „GeoGeMa“ with the drummer Matheus Jardim and Georg Vogel, playing his own constructions of microtonal keyboards. Out of this playground of activities in Februar 2020 the CD „GeoGeMa Vol.1“ was released also on “Jazzwerkstatt records.