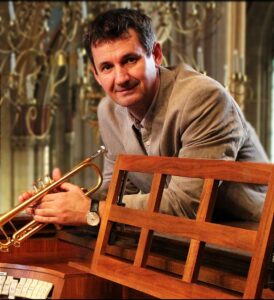 Trumpet player Dario Teskera was born in Našice. He graduated at the Music Academy in Zagreb in 1995 in the class of Professor Stanko Selak. He studied at the Trumpet Academy in Bremen (Trompeten – Akademie Werder) where he had the opportunity to learn from leading trumpet soloists and trumpet players of orchestral musicians of renowned orchestras.
During his studies in Germany, as an intern, he gained experience in orchestral playing by playing in the Bremen Philharmonic Orchestra. From 1998 to 2018 he worked as a trumpet soloist with the Croatian Radio and Television Symphony Orchestra. He is continuously improving his work by participating at seminars, in the field of pedagogical work and trumpet playing. He has performed as a soloist with local and foreign orchestras, at recitals with piano or organ, and as a member of several chamber music ensembles (Ad Gloriam Brass, Simply Brass Quintet).
He is currently a member of the Fiat Lux Trio and the Duo Teskera-Perestegi. He has been collaborating with organist Marija Perestegi since 2013, and they have performed together in Croatia, Slovenia, Italy, Austria, Montenegro, Lithuania, Poland, Portugal and Morocco. In addition to the standard repertoire for trumpet and organ, they often perform compositions by Croatian composers, some of which were composed for their duo.
Apart from the Zagreb Academy of Music, where he has been active since 1999, he also taught at the Academy of Music in Sarajevo. As a trumpet professor, he works at music academies in Zagreb and Ljubljana.