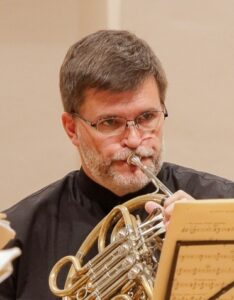 He was born in Subotica. He recived his basic music education at the Music School in Subotica, where he graduated in 1987. During his education he participated in various competitions and festivals of music schools where he won 1st place awards. He performed with the accompaniment of the Subotica Philharmonic orchestra, where he gained his first orchestral experiences. He participates in the work of various chamber ensembles.

He started his studies at the Academy of Music in Zagreb in 1988. in the class of Prof. Prerag Detiček where he graduated in 1992. with the highest grade. During his studies, he participated in competitions for students of music schools and academies and in the competition of young artists. He won first place in both competitions. Also, during studies, he participated in the work of various chamber ensembles and orchestras. In 1989 and 1990. he attended master classes in Vienna (Austria) and Velen (Germany) with Prof. Hermann Baumann where he got the best grades in courses.

I have received rector’s awards, as a soloist and as a member of the academic orchestra in the Mozart Opera project, and the Croatian Music Institute Award.

1991. with my colleagues we established the Zagreb Wind Ensemble with which we achieved notable successes in our homeland and outside. We released the following sound carriers: in 1999 “Summer music”, 2005 “In – Out”, 2006. “Mládí”, 2020. „Boris Papandopulo: Divertimenti Pastorali“. In 2011 we performed at the Split summer festival and Dubrovnik Summer Games with notable success.

Since 1993. I had become a place of the Principal Horn of the Croatian Radio-television Symphony Orchestra.
In the same year I enrolled and started studying horn at Folkwang Hochschule-Essen, Germany, in the class of Prof. Hermann Baumann. I have notable achievements in the work of various chamber ensembles and orchestras, as well as soloists.
I graduated, with the highest grade, in 1995.

I collaborate with Zagreb soloists, with whom I recorded the sound carrier “Sorkočević: Symphonies”. I made notable appearances at home and abroad.

Since November 2007. I have become an external associate of the Croatian Radio-television Symphony Orchestra. In the same year I started my pedagogical work as an assistant professor at the Academy of Music and from 2015 as an associate professor.

I have been a permanent member of the Cantus Ensemble for modern music since its inception in 2001, with which I perform notable performances at home and abroad and numerous recorded parts.

I collaborate with the Croatian Baroque Ensemble with natural/baroque horn.