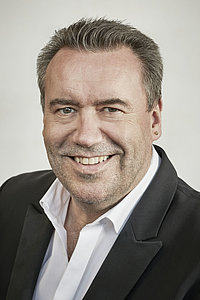 Uwe Köller began his successful trumpet career in 1978 when he first became a student of Rodney Miller in Düsseldorf and later of Pierre Thibauld in Paris (until 1985). He then switched to Martin Kretzer (1986-1988) as a scholarship holder of the “Herbert von Karajan Foundation”. After these extraordinarily inspiring academic years, he started his career as a solo trumpeter in the Berlin Symphony Orchestra and has been solo trumpeter at the Deutsche Oper Berlin since 1991. Since 1997 Uwe Köller has been teaching as a professor at the University of Performing Arts and Music in Graz, where he has been a full-time professor for trumpet since September 2000. The enthusiastic master of his field has been on tour with GERMAN BRASS as a permanent member since 1995.