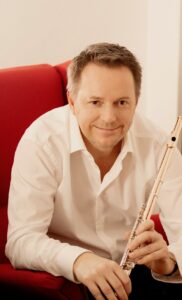 Erwin Klambauer is a principal Flutist of the Vienna Symphony Orchestra (Wiener Symphoniker) and a Professor of Flute at the University of Performing Arts Graz / Institute Oberschuetzen. He studied flute and piano at the Anton Bruckner University in Linz and continued his studies at the University of Music in Vienna.
Important artistic awards were given to him in collaboration with the Gustav-Mahler Youth Orchestra, the Youth Orchestra of a United Europe, and the Camerata Salzburg. In 1992 he joined the Stage Orchestra of the Vienna State Opera and from 1993 until 2013 he has been Principal Flutist of the Vienna Radio Symphony Orchestra. Since 2014 he has been Principal Flute of the Vienna Symphony Orchestra (Wiener Symphoniker).
As a soloist, Erwin Klambauer appears in collaboration with different orchestras both in Austria and abroad. His repertoire consists of a variety of styles including baroque as well as contemporary music. Numerous radio, television and CD records bear witness to his field of work as a soloist.
Furthermore, he performs with pianist Reinhold Puri-Jobi, Ensemble „die reihe“, Ensemble „Kontrapunkte“, and many more.

From 2004 to 2008 Erwin Klambauer was teaching at the Vienna Conservatory Private University. He frequently runs workshops and master classes in Austria as well as abroad.
Since 2008 he has been professor of flute at the University of Music and Performing Arts in Graz/Oberschuetzen.